Is it true that massages don’t only make the muscles feel better?

Massages have been discovered over 3,000 years ago as a traditional method especially to ease muscle sores and injured bodies. Until today, it is still very well known everywhere in rural and urban areas, especially in the Southern East Asian countries.

Growing up in one of the Asian countries, I could not count the number of times I have visited masseuses for traditional massages back in my village; from having a minor sprain, to twisting my back to having a high fever, it is widely believed here that massage could greatly help in a lot of illnesses. The majority of athletes, too, depend on massage guns to loosen up some strained muscles. But how far can massages help? Did you think that massages could only make your muscles ease and feel better?

Well, you may want to think again because of a new study in mice from researchers at Harvard’s Wyss Institute for Biologically Inspired Engineering and John Al. Paulson School of Engineering and Applied Sciences (SEAS) has recently confirmed other benefits of mechanotherapy and immunotherapy and their relation to muscle regeneration.

A core faculty member and a postdoctoral fellow of Dr Dave Mooney, Bo Ri Seo said, “Many people are trying to study the beneficial effects of massage and other mechanical therapies on the body, but until now they have not been done in a systematic and reproducible way. Our work is mechanical stimulation and immune function. It can also be used in patients with illnesses that promise regeneration of various tissues such as bones, tendons, hair and skin and interfere with the use of drug-based interventions.”

How was it experimented?

This study has been under investigation on the effects of mechanotherapy on injured mice since a few years ago by Seo and her co-authors. Published in Science Translational Medicine, the research was conducted using a custom-designed, soft-interface robotic system called a mechanical load, ML, acting as a massage tool that delivered consistent and fixable forces to mice’s muscles. 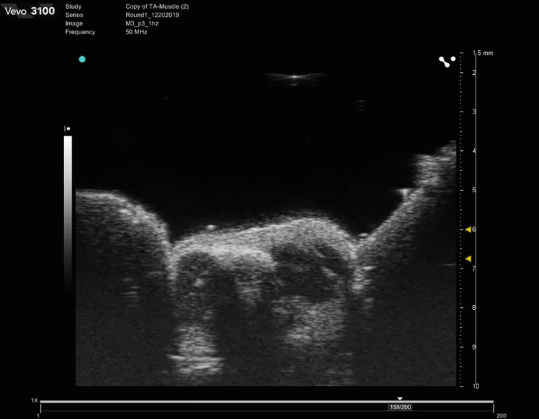 ML, is a specialised robotic device equipped with real-time force control that uses sensors and actuators for monitoring and controlling purposes. It’s developed with built-in compatibility of ultrasound imaging for tissue strain analysis as shown above. The experiment was found effective in the process of muscle fibre regeneration enhancement.

What is the science behind it?

Upon the exertion of controlled and compressive force produced by the robotic system, ML, some reactions are shown by the mice, the reactions are believed to be in a patterned flow:

The detailed biological assessment was made to analyze various inflammation-related factors such as cytokines and chemokines; which are often associated with the movement of immune cells. After being massaged for 3 days, cytokines are believed to dramatically reduce in the treated muscles.

Neutrophils are immune cells that play an important role in the inflammatory process. The study shows a decrease in neutrophil infiltration and researchers had the premonition that the exerted force produced by ML would somehow release the neutrophils and cytokines from the damaged tissues.

Fluorescent molecules were injected into the muscles to confirm the theory. It observed the reactions of the muscles upon the exertion of force from ML.

The treated and untreated mice were observed 14 days after the injury; Seo and her colleague witnessed type IIX fibres in healthy and treated mice, while the untreated ones had an increased number of IIA fibres.

The differences explained the increased fibre size and the production of greater force with greater strength recovery in the treated muscles as noticed in  IIX fibres.

Conclusion to the finding

According to Paul A. of SEAS, “These findings are noteworthy because they show that they can affect the functioning of the body’s immune system in a non-invasive manner without the use of drugs.” A professor in SEAS, Robert P. Pincus Family, had also commented, “Although the fields of mechanotherapy and immunotherapy rarely interact, this study considers both physical and biological factors when studying and working to improve human health. It proves how important this is.”

This study has scientifically proven and concluded that, although massages are mostly noted as a traditional approach to recoveries, the study shows and explains how the body improves over massages that most of us have yet to recognize.

Sure, there are other approaches to directly deliver what your body needs but we also believe that there isn’t any harm in trying other alternatives, which in this case is specifying messages without having the need to use any drugs or what could be foreign to the body.

There are selectable options of massage therapy to choose from; some may use other tools such as bamboo or warm stone, some use aromatherapy oil to relax and tune in your hormones and some would simply force using bare hands. Whichever one you choose, we are sure it will help you feel better. More of them are on our website and may include: